Research and Development plays a crucial role in ensuring the long-term competitiveness of MOL Group’s Downstream business in line with our 2030+ strategy. We are committed to creating sustainable value for our customers and driving changes through novel solutions and products.

While continuing to serve today’s business areas Refining, Lubricants and Petrochemicals, we as Research & Development contribute our technical expertise and innovation power to the development of tomorrow’s business areas and to the transformation of our business towards a more circular economy.

WE CURRENTLY OPERATE IN 5 MAIN AREAS

Downstream R&D supports the company 2030+ strategy by identifying and developing sustainable investment proposals and projects to contribute to MOL Group’s transformation journey. The department strives to provide technological solutions that help to reduce our footprint and carbon emissions by integrating bio, renewables, recycled or low-carbon sources and value chains in our businesses and products.

Our main goal is to develop new polyol products with significant market potential by using similar technology as the complex plant in Tiszaújváros. A new facility – the György Mosonyi R&D Center – was established in 2020 and enables MOL to perform reactor tests on small and pilot scale as well as to execute analytical and polyurethane application tests in accordance with the standards required by our customers.

Our rapidly changing environment and global challenges require us to change and do even more to contribute to a livable future. The development of our polyolefin products will play a key role in this journey. We believe that the key success element is to build strong relationships with our partners throughout the petrochemical value chain and together with them create lasting value for future generations.

We are fully committed to provide professional and sustainable solutions for our internal partners to fulfil MOL Group’s strategy. With the help of our well-trained, experienced engineers, scientists, and technicians in Százhalombatta, Bratislava and Zagreb we have developed several refinery products which allow MOL Group and its customers to improve their performance and efficiency.

Lubrication of moving machinery parts is crucial to keep the world moving. Research, development and innovation are the key driving forces to fulfil our customers’ needs and continuously contribute to a greener world in such a rapidly changing environment. Whether with tailor made product development or via advanced technical services, LUB R&D’s mission is to provide our partners state-of-the-art lubrication solutions, make them achieve better efficiency and maximize reliability.

Our vision is to become a key player in a low carbon circular economy in Central and Eastern Europe. Recycling is a crucial pillar to achieve it, which is why in Downstream R&D we keep exploring and developing new ways that will allow us to provide products with increasing content and quality of recycled plastic waste, but also from other waste streams that are currently hard to utilize. Our projects consider innovative technologies from conventional mechanical recycling to solvent based and other advanced recycling processes to achieve this goal and fight climate change.

Product design is also taken into consideration to make sure that our products not just have optimal performance in the intended function, but can also contribute to close the loop due to their recyclability.

Are you interested in learning more about MOL’s strategic cooperation in the field of recycling? Click here.

R&D is committed to develop advanced, innovative & sustainable technologies configuring high value-added products, satisfying demands from the automobile, building & construction, electrical & electronics and other industries. Decades of technical experience in the polymer industry have led us to create a state-of-the-art polymer R&D lab that offers advanced formulation development, small-scale production, and testing capabilities to our customers. We continue to develop core compounding technologies in diverse areas to sharpen our competitive edge and nurture future growth drivers to contribute in MOL group 2030+ strategy.

Our commitment to keep fuel products compliant with bio regulations has motivated MOL Group’s R&D to look for alternative solutions to fulfil the biofuel requirements. For that purpose, we evaluate potential sustainable feedstocks to replace part of the fossil fuels with renewable fuels in an economical and environmentally effective way. Sustainable biofuels will be important especially in hard-to-decarbonize sectors such as heavy road transport and aviation.

MOL Group has included co-processing of renewable feedstock as a strategic objective in the company’s long-term strategy.

We are devoted to the strategic target of elaborating a new waste utilization & integration strategy as part of MOL Group’s transformational journey. This objective means to accelerate the decoupling from fossil resources and will promote the introduction of low carbon solutions to our industry. We consider waste a valuable resource that could be integrated into value chains to provide sustainable solutions and boost the establishment of a circular economy in Central and Eastern Europe.

MOL Group Downstream aims to provide multiple solutions that can reduce GHG emissions coming from waste that is currently landfilled. In addition to this, the replacement of fossil feedstocks with alternative raw materials (e.g. plastic waste, used cooking oil, waste tires and waste streams that are hard to recycle by conventional recycling processes) will contribute to the reduction of MOL Group’s direct emissions.

Are you interested in learning more about the collection and utilization of used cooking oil? Click here.

For every transport and freight forwarding company, it is vital that their vehicles operate reliably and economically. With this in mind, MOL has developed a state-of-the-art new fuel, XXL Diesel, based specifically on the operating characteristics and specific features of large diesel engines, which has won the 2017 Industrial Innovation Award in Hungary thanks to its modified composition and special world-class additives.

XXL Diesel can be used in all types of vehicles with diesel engines without restriction and is fully compliant with the MSZ EN 590 diesel standard, however, the benefits of the product are most noticeable in large diesel engines.

The availability of the advanced XXL Diesel fuel has been developed to meet the needs of transport and freight companies along major transport routes in Hungary. 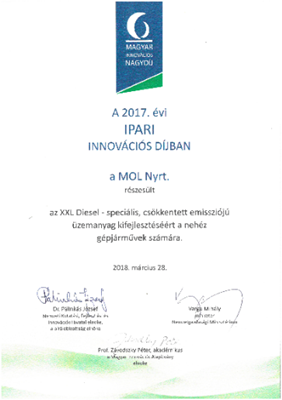 After identifying customer needs over a period of two years involving dozens of racers and engineers, fuel recipe development started by testing several fuel components in a computer model. Lab tests were followed by production experiments focusing on fine-tuning for high-volume production. To ensure that the positive results in the laboratory match the user experience, an external company was contracted for bench testing the fuel using special, top category rally engines. The tested product was also examined in a FIA-accredited lab and received FIA’s international certification. 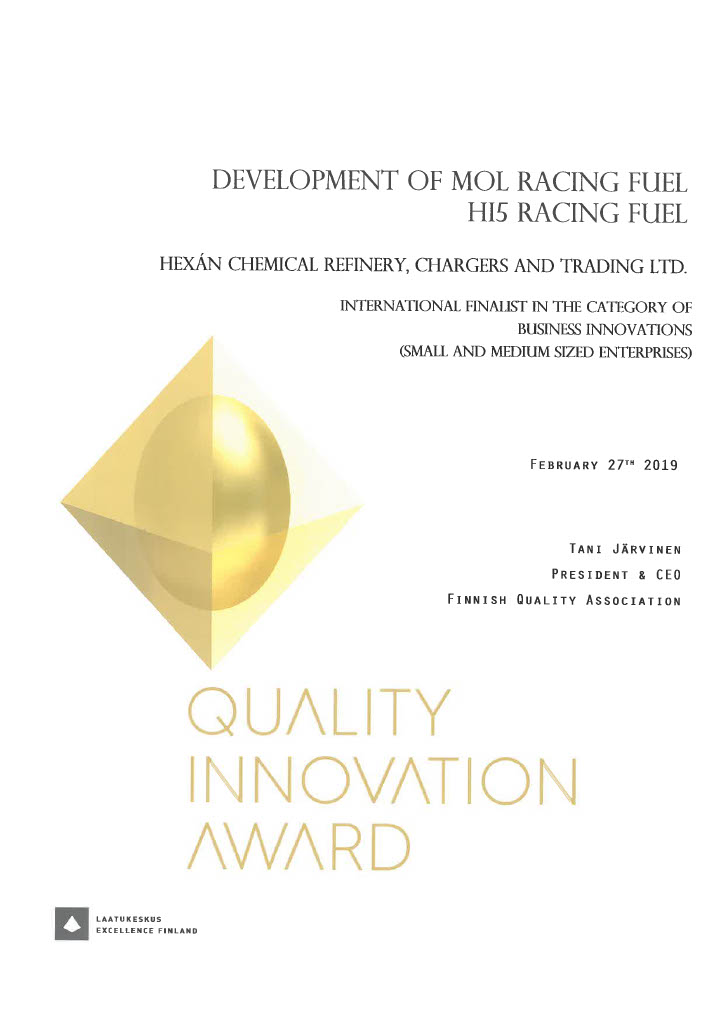 Hi5 racing fuel debuted at the Acropolis Rally, and MOL Racing Team’s driver Norbert Herczig expressed a very clear opinion on the new fuel: “When we kicked off at the start, I felt as if we got a hit in the back with a spade. The car just rocketed out of the grid so fast that I was stunned. Switching gears was much faster than before, I think they did a terrific job at Százhalombatta [location of MOL’s Development Center]” (Link to a TV interview). The development of Hi5 racing fuel has not just been a commercial success and has proven its value to rally drivers, but has also achieved to be one of the international finalists between the SME companies in the Quality Innovation Award 2019, which is a great recognition for the research and development team.

Following several years of research and development MOL Group has stepped up the value chain and has become a biofuel producer, through the realization of an investment in the Danube Refinery. Bio feedstock is co-processed together with fossil materials increasing the renewable share of fuels and reducing up to 200,000 tons /year CO2 emissions without negatively affecting fuel quality. 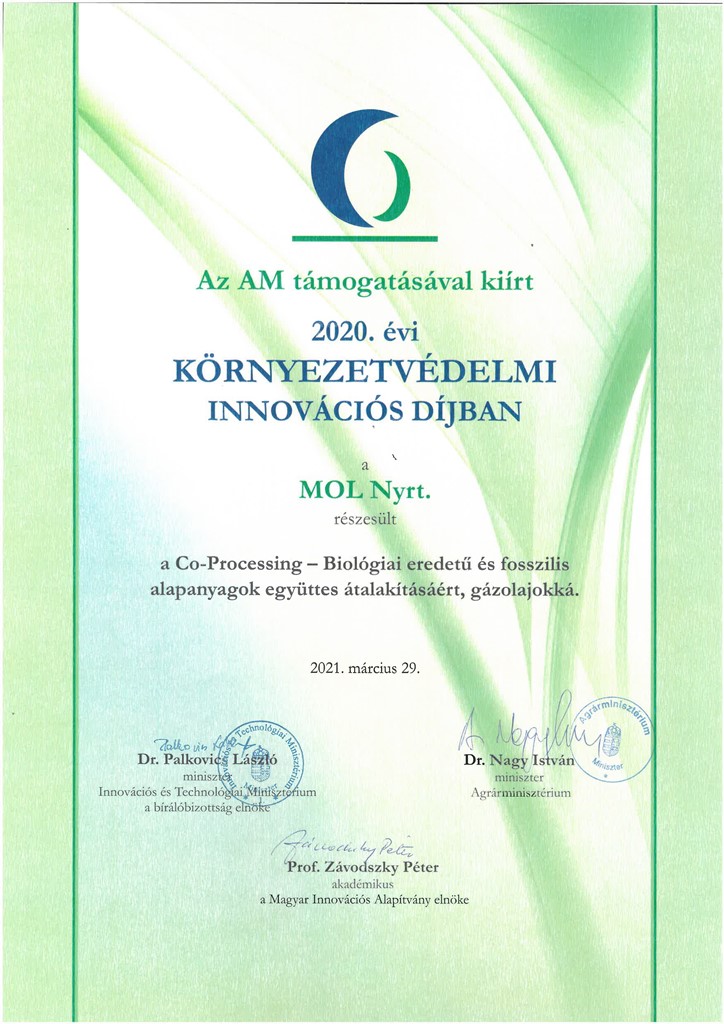 MOL started co-processing as an R&D project in 2012 based on the research results of Pannon University. Types and quality requirements of processable raw materials were determined and the investment was launched in 2018. This included the necessary infrastructure development for storing and processing the new bio-materials. The trial operation of the new process started in March 2020 and has been operating regularly since May 2020.

MOL's co-processing process has been awarded the Environmental Innovation Award for the most significant innovation achievement of the year 2020 by the Hungarian Ministry of Agriculture. The jury's members are scientists and leading economists invited by the Board of Trustees of the Hungarian Innovation Foundation and chaired by Dr. László Palkovics, Minister of Innovation and Technology. The Innovation Award is given based on the originality, novelty and social utility of the innovation.

Used cooking oil (UCO) is one possible renewable feedstock for alternative fuel production (e.g. UCOME). Projects targeting the establishment of collection schemes were launched by MOL Group companies in Croatia, Hungary and Slovakia. Biofuel produced from waste makes a significant contribution to meeting the objectives of the EU Renewable Energy Directive and the Waste Management Plan of the Republic of Croatia. The project also reduces the environmental problems caused by improper disposal of UCO. We are pleased to observe that the collected quantities increase from year to year.

In 2012, MOL opened and successfully operated a pilot plant for rubber bitumen with an annual capacity of 5,000 tons at the Zala Site. In response to increased demand, MOL started building a new plant in the spring of 2019.

The new rubber bitumen plant was completed at the Zala Site, representing an investment of around $10 million. The facility, built in one year, is capable of producing 20,000 metric tons per year of rubber bitumen. As well as recycling 8-10 percent of Hungarian domestic tire waste, the new plant will contribute to the efficient operation of the Zala Site and to the preservation of over 100 jobs.

The new manufacturing technology of rubber bitumen, which is made from bitumen and waste tires, was developed jointly by MOL and Pannon University. Chemically stabilized MOL Rubber Bitumen was patented in 2005, and in 2014 it was awarded the Environmentally Friendly Product Trademark. MOL Rubber Bitumen has received many domestic and international awards. Among other things, it won the Environmental Innovation Award in 2015 at the Hungarian Innovation Grand Prix competition. It also won the “Innovative Product of 2016” award of IChemE (Institution of Chemical Engineers), in a strong field consisting of 23 international applicants.

All the necessary conditions are in place for rubber bitumen roads to become more and more widespread. Hopefully, this will result in road conditions improving noticeably in the long run, as the excellent adhesion of the rubber bitumen to minerals reduces the chances of pot-holes forming and its higher load capacity will result in a lower likelihood of ruts appearing. Around residential areas, it can be an important consideration for construction companies to use this to achieve significantly lower levels of traffic noise, reducing environmental noise pollution.

Tatren IM 15 79 is an ethylene-polypropylene impact copolymer grade with medium flow and high impact resistance. Structure and composition of the grade enable a potential reduction of elastomer or mineral filler during compounding. Its main applications include automotive compounds, storage and transport containers, medical containers, rigid boxes, crates and luggage. 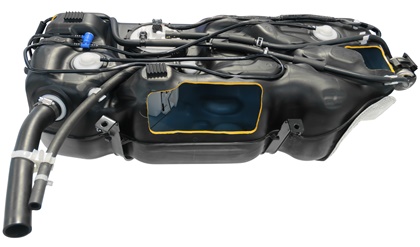 Remolite is a product with 50% post-consumer waste content and an extremely high ESCR property. It can be used for extrusion blow molded HDPE bottles for dangerous goods up to 30 l volume.

TIPPLEN R665 XClear is a new benchmark product with very high gloss and transparency combined with an easy-to-recycle product design.